The classroom is a place where academia and character are taught.  As educators, we are not interested in shoving an extraordinary amount of information in the heads of our students so that one day they can win at “Trivial Pursuit.”  We are concerned with the development of the whole person.  My years teaching foreign language were filled with lesson planning and grading.  However, I had decorated on my wall each and every year the same objective…”Intelligence Does Not Equal Character.” Of course, I wanted my students to excel in Spanish, but more than that, I desired that they would take the information presented and use it critically in all aspects of their lives. 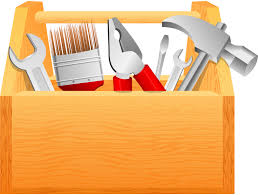 Countless faculty meetings and parent-teacher conferences echoed the same complaint; they are NOT critically thinking.  The honor students to the barely-getting-by students were all demonstrating a lack of self-sufficiency.  Parents were inevitably over-compensating for their children, and teachers were conveniently “spoon-feeding.”  Now “what is best for the child is not always convenient for the parent [or teacher].”  After twenty-some years in the traditional classroom, I had middle school kids enter my class with no idea how to problem solve.  Preadolescence does lend itself to some quirky personalities, but as a whole, I had to deal with moving students through the
stages of Bloom’s Taxonomy on a daily basis.  I gave them the toolbox, the lesson.  I gave them the tools, the stages of learning.  Nevertheless, I had to help them know how to use each tool for its most efficient purpose.  See, if you use a saw like a hammer, you might be able to pound in a nail.  However, it will not be as efficient as using a hammer.  It isn’t that the saw can’t be used to pound in nails; it is just not its best function.  I purposed each September to instill that my students were using “saws to cut and hammers to nail.”  I was certain that in the future someone would expect my students to know the difference between a “saw” and a “hammer,” at least metaphorically speaking.